Saudi Arabia is embracing a new, more efficient way to harness solar power for electricity, inspired by its role as the main developer in one of the world’s largest renewable energy projects, the Mohammed bin Rashid Al-Maktoum Solar Park in Dubai.

Concentrated solar power (CSP), which makes up a large part of the project, has become the new buzzword in sustainable and renewable energy thanks to its ability to store heat and meet electricity demands at night.

The Kingdom will use its experience in the Dubai project as the basis for its own first hybrid project, which is under construction in the northern industrial city of Waad Al-Shamal and will include 50 megawatts (MW) of CSP.

“Saudi Arabia is watching this new project in Dubai in detail as its tariff and scale have attracted the Kingdom’s attention,” said Abdulhameed Al-Muhaidib, director of asset management at Saudi Arabia’s ACWA Power, and executive managing director of Dubai-based Noor Energy 1 (700MW CSP + 250MW PV), one of the world’s largest renewable energy plants.

CSP technology is being used as part of the fourth phase of the Dubai project, the largest single-site solar park in the world, with a total capacity of 950 MW, comprising 700 MW from CSP and 250 MW from photovoltaic (PV) solar power. The project is located in Seih Al-Dahal, 50 km south of Dubai, and is expected to be completed by 2030.

ACWA Power is working as the main developer, using its experience to help further future CSP projects in the Kingdom. And China's Shanghai Electric is together with ACWA Power for the project as EPC contractor.

“I’m sure that in the next phase of Saudi bids there will be CSP components,” said Al-Muhaidib. “It has been announced that 2,700 MW of an upcoming Saudi project will be full CSP, but the detailed timing hasn’t been announced yet. There are more plans for it, and we’re looking forward to working on that.”

As CSP Focus reported earlier, the Renewable Energy Project Development Office of Saudi Arabia (REPDO) published the "Saudi Arabia's Renewable Energy Program 2030"  this January, the country's renewables target for 2023 has been revised up from 9.5 GW to 27.3 GW, and that for 2030 set at 58.7 GW, of which 40GW PV, 16GW Wind and 2.7GW CSP. 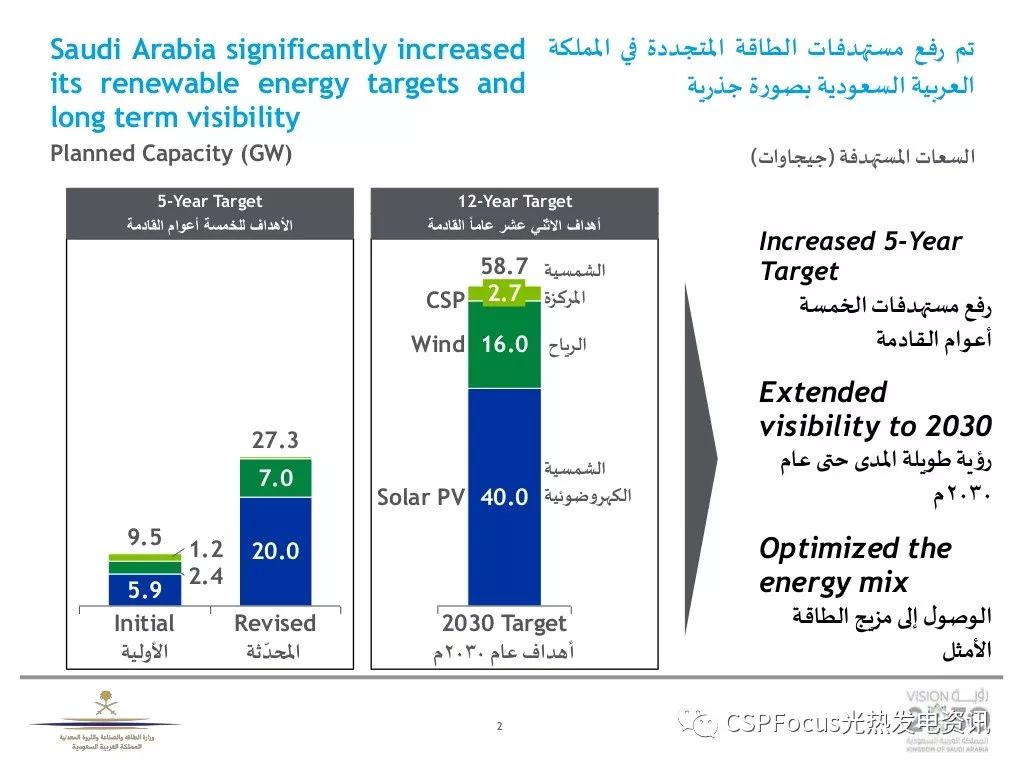 As the picture below shows, the renewable projects will be deployed in 35+ parks spread across the Kingdom,  and 4 of them will take concentrated solar power (CSP) technology. 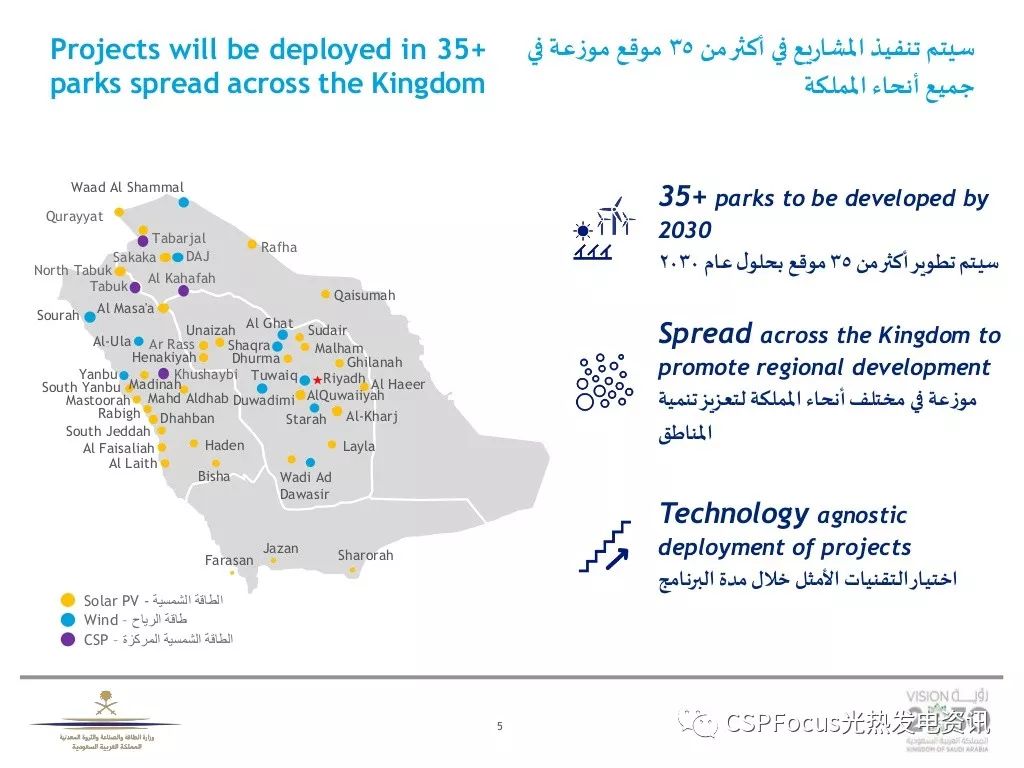 Click to get the full Report: Overview of Saudi Arabia's Renewable Energy Program 2030.

The first batch of projects announced by Saudi Arabia has been in wind and PV. Another seven to nine projects are announced for 2019, all of which are PV.

“The reason (for turning to CSP) is very simple — it’s driven by the tariff, where PV and wind have already internationally given a lower tariff and are basically cheaper compared with conventional energy,” Al-Muhaidib said on the sidelines of a recent press conference announcing details of the fourth phase of the Dubai solar park.

“But for the first time, the price for the new CSP technology has gone under double digits, reaching 7.3 cents per kilowatt hour.”

Al-Muhaidib explained the difference between CSP and regular PV, whereby electricity is created from electrons in the solar PV panels when the sun hits the panels. With CSP, sunlight hits a mirror, and is then reflected on to a receiver. In the receiver, a liquid is heated, which drives a steam turbine connected to an electrical power generator.

“It’s a completely different technology because you have to do a heat exchange and (use) steam turbines, a process that makes it more expensive than solar PV,” Al-Muhaidib said.

“The main benefit is storage because you can store heat, while in panels you can’t and lithium batteries are still expensive.” Large molten salt tanks with a storage capacity of up to 15 hours store the heat and, consequently, allow electricity to be used at night.

Meanwhile, the $4.3 billion phase of the project in Dubai will involve the construction of a 260-meter solar tower, which is now 9 percent complete, providing 320,000 residents with clean energy and a 24-hour power supply from renewable energy. It will also help save 1.6 million tons of carbon emissions per year. On completion, the solar park will result in a reduction of more than 6.5 million tons of carbon dioxide emissions annually.

“A very big responsibility lies on us, but it’s a positive challenge and we will be up to the task,” said Mohammed bin Abdullah Abunayyan, chairman of ACWA Power, at the press conference. “We’ve ensured to set the first block of this project a few months ago, and we’re committed to providing the highest standards when it comes to the environment.

“Both countries have great investments (in this field), and this is one of the most important technical projects in the world,” Abunayyan said.

“Investments in technology are the most (crucial) in today’s world.”

He spoke of a shift in mentality toward renewable energy. “Solar was never considered to be able to produce energy 24 hours a day, and it never had a procedure for storage,” he said.

“But this new project has changed that … The cost is very close or even less than fossil fuels, and we never thought this is something we could achieve.

“Dubai has changed the map of CSP around the world and brought back its competitiveness, while turning it into a fully stable load for a longer time, which wasn’t possible in the past,” Abunayyan said.

Saeed Al-Tayer, managing director and CEO of the Dubai Electricity and Water Authority, said the project marks a new milestone in recognizing the importance of renewable and clean energy, promoting its use and striking the right balance between development and the environment.

“The solar park will produce 5,000 MW by 2030. The project will cover an area of 44 sq km and achieve several world records, including the world’s lowest CSP cost of electricity, the tallest solar tower in the world, and the largest thermal storage capacity allowing for round-the-clock energy availability,” he said.

“The real challenge we’ve been facing with solar systems, especially clean energy, is storage, but ACWA Power is the best in terms of technical capabilities for the project.”

Renewable energy has an essential role to play in the Kingdom’s Vision 2030 reform plan, as the country looks to diversify its economy and shift away from its dependence on oil.

Dr. Robert Ichord, a senior fellow at the Atlantic Council Global Energy Center, said the Kingdom’s annual electricity growth is 8-10 percent, with estimates that it will rise in the near future as electricity demands potentially double by 2030.

And with two peaks in electricity in Saudi Arabia — one in the day and one at night — Al-Muhaidib said the country needs to prepare itself to ensure that it is able to meet that demand at night.

“This is where CSP will come into play,” he said.

ACWA Power’s contractor is working with several Saudi manufacturers to provide them with knowledge about CSP technology.

Thanks to the crucial role in Dubai CSP market, and the supportive planning of 2.7GW CSP in 2030,  Saudi Arabia is growing to be a shining star in global solar thermal power market.

Registration as normal delegate and application for speaking and exhibition are going on, Click to get brochure of CSP Focus MENA 2019 and you may enjoy early-bird price before May 2nd, 2019.