The Megalim solar thermal power plant, a joint venture of BrightSource, GE Renewable Energy and the Noy Fund, said on 10 April, that it has begun commercial operation in Israel. 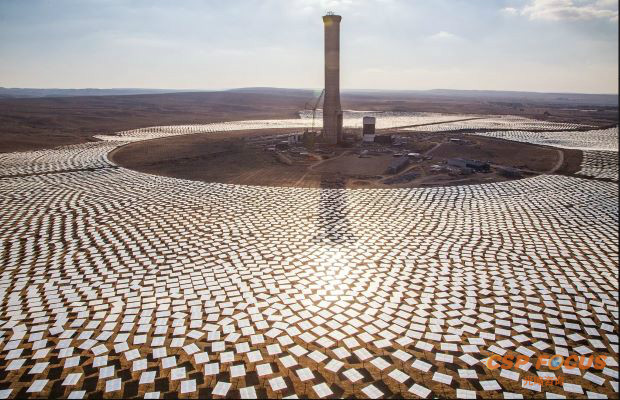 The Ashalim Solar Thermal Power Station, located in Israel’s Negev desert, is one of the largest projects of its type in the world. It is also the first solar thermal or concentrated solar power (CSP) plant to be undertaken in Israel by the partner companies- BrightSource, GE Renewable Energy and the Noy Fund. The $840 million concentrated solar power project was announced in 2008 and construction began at the end of 2014 by GE Renewable Energy.

The Ashalim power station’s concentrated solar power (CSP) technology is using more than 55,000 computer-controlled heliostats or mirrors spread over a 3.15 km2 area to track the sun in two axes. The sunlight will be reflected to a special type of boiler, a Solar Receiver Steam Generator (SRSG), which is located at the top of a 240-meter tower. When the concentrated sunlight strikes the SRSG, it heats water in the boiler to create superheated steam that is then fed to a steam turbine for power generation. Compared to solar photovoltaic (PV) applications, direct steam CSP has the advantage of being able to produce electricity for longer periods of time during the solar hours. For fans of the Lord of the Rings trilogy, it will be interesting to know that the tall tower has been likened to Sauron’s dark tower from the series, thanks to its all seeing ‘eye’ made up of thousands of mirrors. Visible from miles around.

The Ashalim plant will help increase Israel’s energy security by reducing dependence on fossil fuel imports. At the same time, it will avoid 110,000 tons per year of CO2 emissions, helping the government achieve its goal of generating 10 percent of its electricity from renewable sources by 2020. The Megalim thermo-solar station will provide power to about 50,000 households at peak. It is one of three facilities in Ashalim that are expected to produce about 2 percent of Israel’s electricity capacity. The solar-thermal power plant in Ashalim (Plot B) with a rating of 121 MW and expected to supply 320 GWh of electricity annually into Israel’s grid.

Interestingly, most of the world’s CSP plants are coming up in emerging economies. A majority use molten salt storage as the medium to store power for supply on demand, or for extended hours beyond sunshine hours.