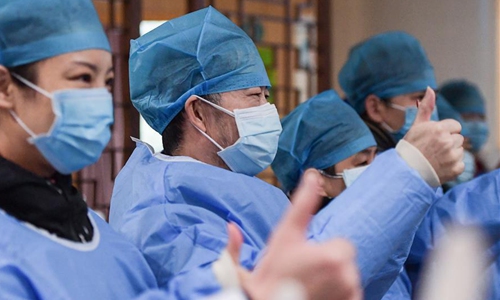 加油中国！When the United States 2009 H1N1 swine flu emerged, an international emergency, a declared global pandemic, it eventually infected 60 million and initially killed a minimum of 18,449 cases that year. But the final story of the H1N1 global pandemic was far worse than that, with close to 300,000 deaths, according to the final tallies in 2012 reported by the CDC, as you will read below.

Which is why I am scratching my head at how bizarrely negative forces are attacking China and Chinese people as it engages a remarkably aggressive front addressing this Corona virus outbreak which started in Wuhan, central China. I am forced to ask and answer a few questions.

During 2009 H1N1 outbreak, I don't recall xenophobic anti-America attacks across the globe, do you? In fact, do you recall it took six months for the U.S. to declare a national emergency? Did any government from the onset in April 2009 through the end in April 2010, including the month of June, when H1N1 was declared an international emergency global pandemic, then send out a notice to its citizens that they should leave the United States? Close their borders to American travelers? Nope, not a peep.

Like I said, something's not right, folks. I am reading hateful vicious attacks on the Chinese government for their supposed intentional conspiracy to intentionally under report the number of infections, yet that is exactly and always the case with such flu outbreaks no matter what country and the CDC reports illustrate that crystal clear. The U.S. H1N1 swine flu numbers were vastly underestimated and updated three years later, because dear friends, that is the nature of such viral outbreaks which don't care which country they started in. There is never enough man power, there are never enough test kits, there is never enough medicine or medical supplies. China is not trying to hide these hardships, they are well known, they are being reported on the news daily in China. There are always people who die, thousands of them whom we'll never know if they actually died because of a particular virus. Those are the facts, not any problem unique to China's healthcare system or government.

Its not a conspiracy, its just tragedy.

According to the June 27, 2012 research report followup three years later, it gets much more disturbing when you learn about the CDC's final estimate of the H1N1 virus global death toll. You and I find at this at this article at the Center for Infectious Disease Research and Policy website, the CDC's 18,449 total deaths number was "...regarded as WELL BELOW THE TRUE TOTAL, mainly because many people who die of flu-related causes are not tested for the disease." So during the 2009 outbreak, was anyone accusing the American medical and government authorities of hiding the numbers? Were Americans with hidden cameras strolling into the Mayo Clinic to PROVE how many people were really dying? The absurdity of these vicious attacks are that whether or not a person specifically does have the Corona virus or some other viral bug presenting as pneumonia, the treatment is the same supportive treatment anyway.

Something's not right here folks. The world should be applauding China's unprecedented, broad, aggressive response. (WHO officials and many other government and healthcare officials across the globe are.) I am on the ground here in China READ IT HERE watching with my own eyes and it is quite incredible by any measure, not to mention an enormous economic sacrifice.

Instead of looking at the will of an entire system of government acting faster than any other government on the planet could, we are one month later, still busy bashing a few local government officials in Wuhan who should have told us a couple weeks sooner. And yes, that is true those local officials screwed up. And by the way, those officials are in deep trouble for it. Just like the recent Puerto Rican politicians who are in trouble when we learned they didn't distribute hurricane emergency supplies that were sent to them to help during last year's terrible hurricane. A disgrace. Individual people screw up all the time and hopefully justice gets served later, but that's not an indictment of an entire country's government. Secondly, on this point, every provincial government has sent out a notice to its government officials pretty much saying that if they are stupid enough to do the same, they will face the wrath of harsh punishment. I don't doubt it for a moment. Lets contrast to what countless western politicians have gotten away with and remain in office to remind all of us that human error, stupidity and greed is not unique to any particular skin color or race or country. "What about..." reactions don't help.

And here's the mic drop for you: "The CDC researchers estimate that the H1N1 2009 pandemic virus caused 201,200 respiratory deaths and another 83,300 deaths from cardiovascular disease associated with H1N1 infections." Total: 284,000 deaths. Shocking, isn't it?

Was there a travel ban for any length of time to and from the United States?

Did China, Germany, Japan or any other country close their border to American travelers?

Today I noticed in the updates that following the United States Department of State policy suggesting U.S. citizens leave China, the United Kingdom embassy just released the same recommendation to subjects of the kingdom.

In 2009, did UK subjects in America get a notice from their kingdom to leave America? No.

Did the world suggest we isolate from America? Close the U.S. borders!? No.

Did Americans get xenophobically attacked and targeted by anti-American sentiments like the Chinese are experiencing now? Um, no.

Fascinating and disturbing to say the least. If you're an expat currently in China, unless you're in Wuhan, fact is that you're most likely safer and more peaceful and more stable by simply staying put than by leaving right now. You couldn't be safer than in this country, where almost everyone is staying home and dutifully isolating themselves with awareness. Not to mention that the Chinese government's decision to safeguard the society, the families, the people, is coming at a devastating economic cost in the hundreds of billions.

I have a friend in Mesa, Arizona. He told me earlier that the big popular China City buffet, a huge busy place, has no customers. Does that make any sense at all?

Let's test our ability to reason, to be rational:

If you were in Miami and you heard that there was a virus outbreak that started in Milan, in central Italy, would you cancel your dinner reservation at the Italian restaurant that night in South Beach? No. Would you buy a pizza next week at Joey's Pizzeria in Delray Beach?

If you were in Singapore and you heard there was a virus outbreak in Dallas, Texas in the central United States, would you stop going to your favorite local Texas southern BBQ restaurant with the owner from Houston, in Singapore?

Would you avoid olive-skinned dark-haired Italian-looking people on the street in Chicago? Would you avoid big guys wearing cowboy hats, cuz they're obviously from Texas in Singapore cuz there's a virus in Dallas and they might have just gotten off the plane? There's a strange senseless bullying extremism and activism in today's society and you should do your best to avoid it and not be a part of it. It is fomented by a small group of extremist activists while definitely not supported by your average mainstream person who is simply exhausted by their outrage-inducing antics.

Finally, here are some straight up, sensible accurate descriptions of this Corona virus which started in Wuhan, China. Its not called the China virus and neither was H1N1 called the America virus. Whether two weeks or two months from now, this flu season type virus will have passed and the joy of Spring will have arrived. Just like every flu season. However, don't misunderstand me. The extra caution and the remarkable response by the Chinese governments and people together to quell the spread of this virus was warranted because, yes it is correct that this corona virus is nastier than the usual annual flu bug, as was H1N1 in 2009. As of now, what we can confidently note the following regarding this Corona virus:

This Corona virus is highly contagious, it spreads quite easily. It binds to lung tissue and so in particular, likes to cause pneumonia, that's what infection of lung tissue is. That's more severe than a respiratory infection which is only in your throat or bronchial tubes.

The Corona virus is causing severe symptoms in 10-15% of cases. 80% to 90% of deaths from this virus are happening in elderly patients, mostly with other existing health problems, not younger people. That characteristic by the way, is in contrast to the America 2009 H1N1 swine flu virus which in fact had a higher death rate amongst younger people including children rather than those over 60 years old.

China identified and shared the Corona virus genome in record times, in only days and of course, immediately shared it with all international health and disease organizations. Medical researchers are already discovering that certain existing anti-viral medications seem to be effective against this Corona virus.

Its impossible not to marvel at China's broad and aggressive domestic response directed by the provincial level governments to restrict movement, restrict transportation, restrict business for a period of time combined with the voluntary dutiful cooperation of its 1.3 billion citizens who are in the majority quietly staying at home these weeks to let the virus pass; this model response is already being hailed by the international community as a remarkable unprecedented response setting a new standard in understanding what is possible for future outbreaks in whatever country they may occur. Is it inconvenient and costly. You bet.

Like I said, something's not right with the way humanity is responding to what's happening here. I haven't put my finger on it because well, its certainly complex and the world is upside down in many other ways that I also can't for the life of me understand or explain without ending up writing a very thick book.

But I do know this: It needs to stop. This vicious, political, xenophobic racist attacks and smearing of all things China needs to stop. Its really not helping anyone in the political corridors of Washington nor is it doing anything to help the man on the street who is just concerned with taking care of his family.

My family is originally from the Basilicata region of Italy, the little hillside Italian towns of Potenza and also, Grottola, which is just outside of Matera. They left their home country and moved to America where I was born, in Yonkers, New York. America became their home and it was my home until I left, too. Now over two decades ago, I left the United States, the country I was born in, the country that has plenty to admire and plenty to improve. But I left and I came to China and now China is my home. If you had asked me thirty years ago if this was my life plan on planet earth, I would have said you were nuts or a really bad fortune teller. But that's how it has turned out. I am truly blessed with my lovely Chinese wife and our family living here in Shenyang in China's northeast. You get my meaning? I am a mature adult like many with the powers of observation. I can easily see that whether we are talking about China or the United States or any other country, their societies and their governments have good points and bad points.

The xenophobia needs to stop now. Whether in a couple of weeks or months later, this nasty flu type Corona virus will begin declining and the joy of Spring will arrive. Between now and then if you don't have anything good, anything supportive to say about China or Chinese people, how about you just keep your mouth shut.