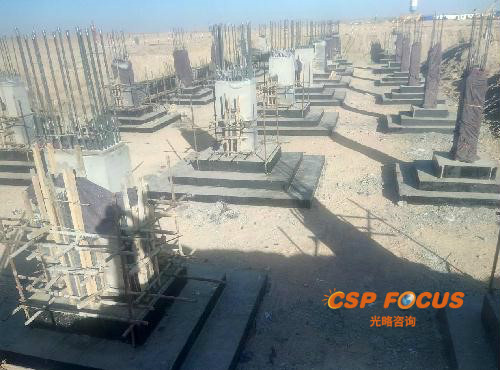 5 companies participated in the bidding as list as below:

Another progress on the Yumen Xinneng 50MW CSP project: The project construction subcontractor, Anhui No.1 Electric Power Construction Co., Ltd announced that the base column pouring has been constructed on schedule. With the effort of all staff, the task has been finished on Nov, 14.

CSP Focus China 2018 Mar.22-23 Beijing will invite major project developers and core component vendors to explore current status, progress and challenges of Yumen Xinneng 50MW Molten Salt Tower CSP Project as well as other pilot projects. Sincerely invite you to join in the conference and probe into the development of China CSP industry.

Book your seat right now to gain early bird discount SAVE USD300 by registering before Dec.7th