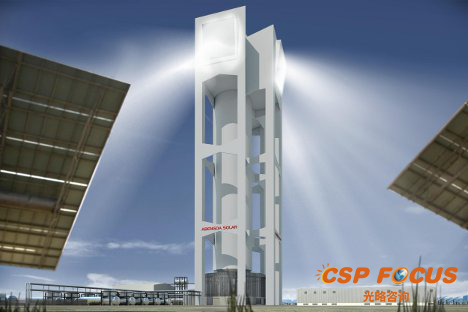 As a gloabl leader in the development and technological consultancy of concentrated solar power (CSP) projects with an installed base of 2.3 GW,  Abengoa has extensive experience in the solar thermal sector worldwide, having constructed solar plants in four continents.

The first one, 50MW Yumen Royal Tech Parabolic Trough plant is amongst China 1st batch of CSP demonstrations, and will take silicone oil as the HTF, with 10 hours' storage system. As CSP Focus reported this June, China Shouhang Energy Savings Company was awarded the EPC contract with the price of RMB 1.6 billion, and the project was officially started construction soon. The project is expected to be completed by the end of 2019 next year.

Abengoa will be responsible for supplying the technology for the E2 new generation collector, the engineering development and providing the technical support to the Royal Tech Yumen project.

The second one, which is developed for SEPCO III Electric Power Construction Corporation---the project EPC contractor, involves the supply of technology and the engineering development for the Luneng Haixi State 50 MW molten salt tower solar thermal plant project, in the Qinghai Province, as well as providing technical support during construction.

50MW Luneng Haixi Molten Salt Tower CSP plant broke ground in June, 2017 and will be connected to the grid next year in 2019.

This project is part of the renewable energy program launched by the Chinese Government which aims to achieve a solar thermal installed base of at least 27 GW by 2030. Developer Luneng Group is a subsidiary wholly owned by State Grid Corporation of China focusing on real estate and energy sector since 2002.

Moreover, the company is also present in China where it has designed, constructed and commissioned a water desalination plant in the coastal city of Qingdao, China.

During the upcoming CSP Focus Innovation 2018 event in Xi’an, China during October 25-26, which will be the can’t missing gathering for global CSP industry players, Abengoa will share on CSP plant participation and technology innovations, the representative speakers will be Mr. Miguel Mendez, Head of Solar Technology Department and Mr.Taoufik Fadil Hechadi, Head of Business Development O&M Services.