Shanghai Electric, as the EPC contractor of Dubai 950MW CSP+PV solar complex, the fourth phase of Mohammad Bin Rashid Al Maktoum Solar Park, made a detailed report on the huge solar power plant during the Press Release in Beijing.

The fourth phase of the solar park will use three technologies to produce 950MW of clean energy — 600MW from a parabolic basin complex, 100MW from a solar tower, and 250MW will be generated from photovoltaic panels.

As the project owner Dubai Electricity and Water Authority (Dewa) said earlier this January that construction work on the project has advanced further with the completion of 128 pillars of the project’s solar tower.

To get all the 20 pages content of the report: 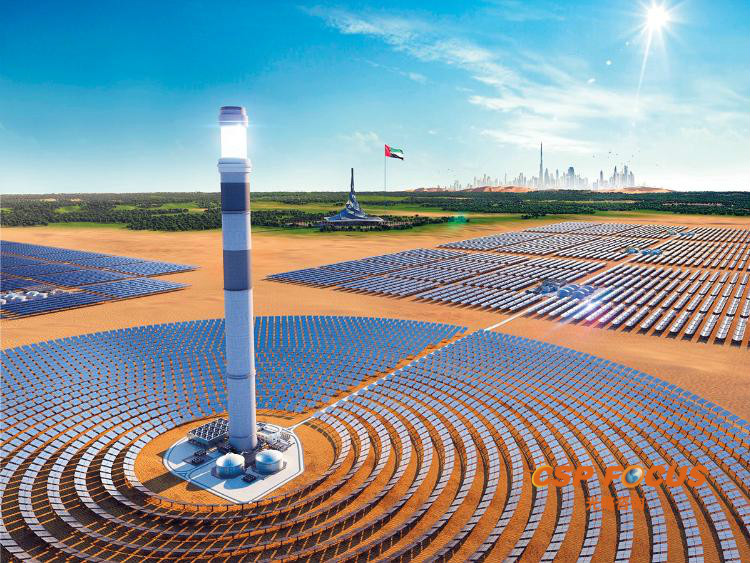 Featuring a total investment of Dh50 billion, the whole park will reach a total capacity of 5,000 megawatts (MW) by 2030. The total capacity of the fourth phase rose from 700MW to 950MW, with investments for this ambitious project reaching Dh16 billion.

As CSP Focus keeps reporting on the progress, the project was awarded to ACWA consortium on September 16, 2017, and its opening ceremony was held in Dubai on March 19, 2018. Shanghai Electric signed EPC contract with DEWA, ACWA Power on April 13, 2018 in Shanghai, China. The construction has been started since December 21, 2018.

The expected construction duration lasts 48 months, meaning the overall 700MW CSP project will be completed by the end of 2022 in four years. Seperately, the first parabolic trough CSP plant is planned to be operational on August 21, 2021, in 32 months, tower CSP plant finished on November 21, 2021 in 35 months, and the second and third parabolic trough plants to be completed by the end of the year of 2022.

It also achieved the lowest Levelised Cost of Electricity of USD 2.4 cents per kilowatt hour (kWh) for the 250MW photovoltaic solar panels technology and 7.3 cents per kWh (2.9 cents in daytime, and 9.2 cents in night time) for the 700MW CSP technology, the lowest worldwide.

CSP Focus summarises on the participants of the 700MW CSP project as below, a group of Chinese firms joined the project providing engineering and construction services led by the Chinese power group Shanghai Electric.

To get all the 20 pages content of the report:

As the unique professional conference for global CSP peers focusing on MENA region,  the 4th CSP Focus MENA 2019 will be held on Jun.26-27 in Dubai again. Registration and application for speaking and exhibition are now open, Click to get brochure of CSP Focus MENA 2019 and you may enjoy early-bird price now.