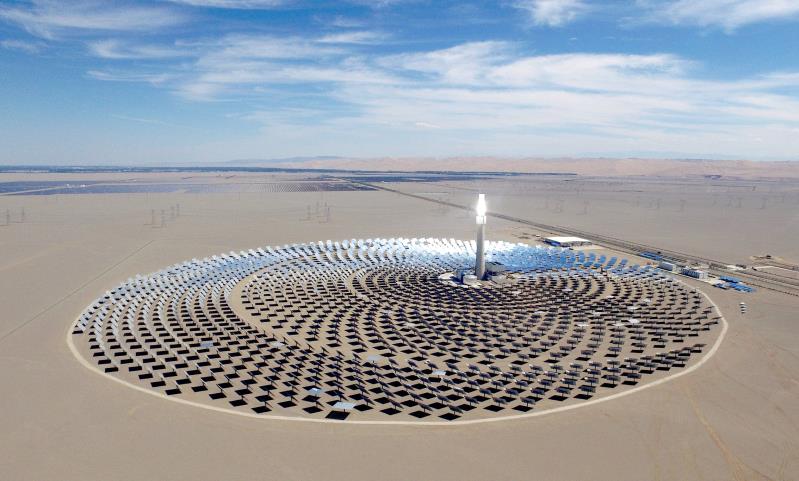 As Mr. Huang Wenbo, Vice Chairman of Beijing Shouhang IHW Resources Saving Technology Co., Ltd (shorted as Shouhang) reported recently on the performance of Shouhang Dunhuang 1st phase of 10MW molten salt CSP tower project, "It has been operating with quite good performance for alomost two years since the officail start on December 26, 2016. "

"Looking back at the statistics in the whole July this year, the generation capacity of the 10MW Tower CSP project reached 2021280 kWh, the steam turbine was started 11 times, and a record continuous 133 hours' power generation was sucessfully made in July, 2018."

7 cloudy days, the heating system worked some times when sunny;

5 days without any sunshine, no molten salt in the tower worked;

19 sunny days, all the molten salt was transferred onto the tower for heat-collecting.

Mr. Huang also talked on the progress of the 2nd phase of Shouhang Dunhuang 100 MW molten salt Solar Tower CSP Plant, which is among China 1st phase of 20 CSP pilot projects. As the onsite pictures show, the construction work of the 100MW project is close to the end, the solar field is soon to be completely installed, both HTF&TES system and power island are almost done. All the molten salt is ready on site and the melting work is expected to start very soon.

Shouhang says that all is going quite well with the 100MW tower CSP plant, and as promised, the project will be connected to the grid by the end of 2018, and expected to be the second CSP demo to be completed in China after the first CGN Delingha 50MW parabolic trough CSP plant.