Recently Luneng Haixi 50MW CSP molten salt Tower hybrid project in China called for tenders of EPC, and received 8 biddings from 8 Chinese companies. The lowest price was offered by Zhejiang SUPCON Solar Technology Co., Ltd. (shorted as SUPCON) as RMB 1.2 billion (about USD 180 million), among which the cost for solar field is approximately RMB700 (about USD105) per square meter.

The price of RMB700/㎡ on solar field refreshes the low cost of for CSP Tower project in China, and is definitely a milestone number on the way of cost reduction for both China and global CSP.

SUPCON, as one of China leading CSP Tower technology providers and project developer & EPCs, constructed and operated China 1st commercial 10MW CSP Tower project in the year of 2013. As SUPCON told CSP Focus, the price on solar field of that 10MW was over RMB1, 300/㎡, which was over twice as the one offered to date. 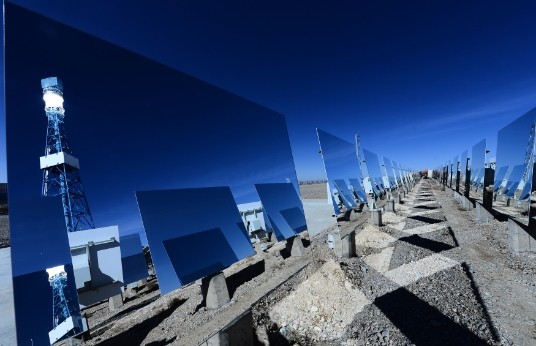 SUPCON is also engaged in developing and constructing its Delingha 50MW CSP molten salt tower project, which is among China 1st batch of 20 CSP pilot projects. According to its experience on project construction and purchasing, SUPCON is confident that the cost of RMB700/㎡ on solar field will be able to create real profit for project owners.

50% off on solar field cost means a lot to China and global CSP market. Take a 100MW CSP tower project with 12 hours storage as example, the solar filed covers 1.4 million square meters. If the cost would reduce from RMB1, 000 to RMB700 per square meter, the total cost of the CSP plant would be saved RMB 420million, meaning the rate of return would rise from 8-10% to 15%.